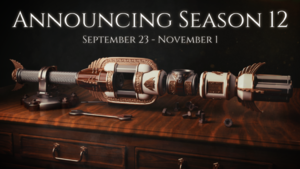 Since Season 4, top 10 players have been awarded the Invicta wand

During a season, players climb the leaderboard and compete for the highest score. A season typically last 2-5 months. Becoming Season Champion is the highest achievement in Wands.

All players start with the same score at the beginning of a season. Everyone above level 9 is automatically added to the global leaderboard. The current rankings can be found in the Leaderboard section of the Workshop's blackboard. You earn points for winning competitive games against other ranked players, and you lose points when you're defeated. You earn more points for beating strong opponents. If there's an extremely large rating difference between two players, their games are unranked exhibition matches.